Well done Isabel from Y5 for  achieving Grade 1 for Trombone - with the highest score her music teacher has ever had 134/150!

Legacy Cheer and Dance Competition - Building Leaders for Life, May 2018

Well done Sam from Y1
For taking part in a triathlon.

Well Done, Lily B Y5 has Sponsored a Guide Dog
His name is Alfie

Well done to Patrick Y4, Freya, Emily and Rosie all Y1 for participating in the Gala Theatre Stage School Production of "Decades - A Musical Journey".

Well done to Rosie in Y1 who wrote to the Queen and received a reply with some very interesting information!

Well done to Jessica in Y6 (and her 4 other team members) who won this fantastic trophy for "1st Place Group Stunt" in a Cheerleading competition at Gateshead.

Well done to Holly in Reception Class for completing a Pony Academy Day at Leamside Equestrian Centre. The pony she rode was called Flower.

Well done to Megan in Y4 for winning a gold medal at the Newcastle Area British Judo Competition!

Certificates of achievement will be awarded at school next week for pupils who participate in snow-day home activities. Here are some suggestions

Photo (which you do need to print at home please)

I am looking forward to seeing your work!

Well done to Patrick, Year 4 for his success in achieving medals from "The School Run". The two medals were "Running 2K on Christmas Day" and completing the "Marathon Challenge 2017" which meant that the combined total of the runs he had taken part in during 2017 was the equivalent or greater than the distance of a marathon. Keep up the good work!

Mariam, Year 2 coped brilliantly with an unexpected change during the Christmas performance. You are a true performer!

Well done to Lily Rose, Year 5 for putting on her climbing shoes, harness and suit to climb to the top of the O2 Building.

Well done to Tomas from Year 5 who did a fantastic drawing to win a competition for the Chief Constable’s Christmas Card. His art work, on the front of the card, will be sent out across the country. He also won some fantastic prizes, a framed copy of his own picture, a mountain bike, selection box and a “PawsUp Bob” cuddly toy (normally sold in aid of the Durham Retired Police Dogs Benevolent Fund). Deputy Chief Constable Jo Farrell visited with her colleagues and Jet the police dog to congratulate Tomas and to remind us all to stay safe this Christmas!

Jet the police dog reminds us about staying safe at Christmas...

I am very proud to let you know that we had two winners in school this year. Roberta Blackman-Woods, MP for Durham City, ran a competition for pupils to draw a picture for her Christmas Card. Yinuo Y5 (who has just returned to China) won and her picture is on the front of the card. Emma Y1 was third and her picture is on the back of the card. The pictures are amazing and congratulations on your success!

We hope you enjoyed the festive items we made this year in Enterprise Club, the children certainly had fun making them! However in true entrepreneurial fashion we also spent time looking at packaging, marketing and pricing our products. We made £220, of which £170 was profit for the PTA who funded the enterprise. The PTA pay for many fun and educational things in school.

Exert from the web site explaining about running for "Mens Health"

The power of MoRunning brings out the best in all of us!

Whether it makes you run fast, run in style, run in pride or run together, it has the ability to make us all smile, whilst at the same time help raise massive awareness and funds for Men's Health through the Movember Foundation charity.

2017 is set to be even better than ever. One of the most exciting additions to this year is the introduction of Mini MoRunning. A 1.5km mini MoRun. Remember MoRunners, you're part of a community, a family, a team. When you step up to that start line, remember that you're helping men live longer, healthier lives.

We'll clap for you, we'll shout at you, we'll support you, maybe even laugh at you (all in good humour of course) but mainly we will praise you for your commitment to making a difference. Run hard, run fast, have fun and enjoy being part of something special.

​If you go down to the city this summer….you may come across a teddy bear!
The summer hunt for Durham's 'Safe City Bear' was launched in the Market Place in Durham city. Safe City Bear was joined by police, civic dignatories and local families who helped with the launch. A total of 115 teddy bears were hiding in shop and cafe windows across the city centre, each wearing a blue, red, green or yellow sash representing a key safety warning.

To help us make Durham the safest city in the country, the idea was that children, would get involved to hunt for the teddy bears and when found would be reminded of the safety message that particular bear represented.

The bear hunt ended on Sunday, 30th August and the winner announced on Wednesday, 2nd September, is Isa, Year 3 from Finchale Primary School.

Well done to Daniel and Charley from Year 2 who were in a newspaper article in the Sunderland Echo for playing brilliant football. They play for Deerness Football Club and Durham County and were celebrating their achievement of wining a match against 9 year olds when they are only 6 years old themselves. Keep up the good work boys! 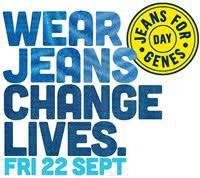 We all wore our jeans to school on Friday 22/9/17 to support Jeans for Genes Day. We raised a fantastic £162.40 for this worthy charity. Well done and thank you to all involved including Fergus in Year 5 who suggested the event to Mrs Whitton.

The difference you make

The charity helps disorder-specific charities and patient groups to deliver inspiring projects and support services for children affected by genetic disorders in the UK.

The monies raised on Jeans for Genes Day provide grants for day-to-day support, equipment, nursing and patient support services, and events which bring together affected children and their families.

Well done to Meadow Y6 for passing her ABRSM Grade 2 clarinet exam, this is a great achievement!

A huge well done to our Great North Run participants:

Well done to a special young lady in Year 4 for winning a prize at a Horse Show. She was the Class Winner for the horse that was well groomed and ran out nicely. A great achievement at a championship show!
Top

Unfortunately not the ones with chocolate chips.

Some cookies are necessary in order to make this website function correctly. These are set by default and whilst you can block or delete them by changing your browser settings, some functionality such as being able to log in to the website will not work if you do this. The necessary cookies set on this website are as follows:

A 'sessionid' token is required for logging in to the website and we also use a 'crfstoken' token to prevent cross site request forgery.

Cookies that are not necessary to make the website work, but which enable additional functionality, can also be set. By default these cookies are disabled, but you can choose to enable them below: